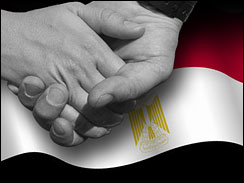 Nine men have so far been sent to prison in Egypt for the “habitual practice of debauchery” and the country’s highest court has upheld the ruling. These men were victims of a pogrom designed to target men who suffer from HIV. The assumption was made that such individuals must be homosexuals and could be prosecuted under anti-debauchery laws. Human Rights Watch and other organizations have cried foul at these human rights abuses and warned that HIV will surely rise as a result. Ironically, prosecutors cite “a danger to public health” as the justification for the men’s incarceration. The methods used to find the suspected homosexuals were brutal. People suspected or reported to carry HIV were violently interrogated and any names secured in the process led to more arrests and further inquisition. Some men who tested negative were released without charge after a month's detention, demonstrating that HIV was being used as a proof of debauchery/homosexuality.

This blatant assault on human rights and overt disregard for public health by Egyptian officials is a stark reminder of the flip side to changing gender roles and generally broader acceptance of alternative sexuality. These rulings are a warning for supporters and detractors of greater gender and sexual freedom. For those who disapprove of homosexual lifestyles, consider what might be the lesser of two evils. The decision of the Egyptian authorities will be unlikely to end homosexuality in their country, it will send the ever present community back underground and rightly discourage individuals from coming forward to seek assistance and education about living with HIV. This will set the stage for a greater public health crisis and set a precedent for the government’s control of peoples most intimate personal lives.