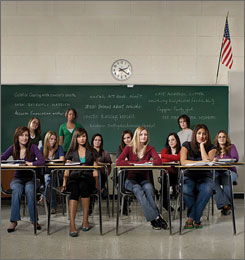 USA Today reported "Those who have been through it have long known, high school can be tough on teens. For Sharon Liese, who graduated in the mid-'70s, high school was difficult and unfulfilling. So when her daughter, Justine, entered ninth grade, Liese decided to put the lives of high schoolers under a microscope. Four years and 500 hours of filming later, Liese's effort premieres tonight on cable's WE channel. The eight-episode High School Confidential (10 ET/PT) is part documentary and part reality show. It focuses on 12 girls who attended Northwest High School in Overland Park, Kan., from 2002 to 2006."  Confidential offers a compressed view of the physical and emotional transformation of adolescence.  TEENAGE LIFE IS HARD! Unfortunately so many teens try to FILL THE VOID with harmful behaviour. There's Lauren, the good girl/drill team captain/homecoming princess who eventually has surgery to remove a brain lesion; Cappie, the party girl from a single-parent household; Jessi, the devout Christian who survives a miscarriage and suicide attempt; Sara, who marries by her senior year; and stepsisters Cate and Beth, whose recently married parents are about to divorce. Their stories — and those of others — dealt with sex, drugs, relationships, eating disorders, depression, peer pressure, self-mutilation and social cliques. Liese was surprised at the scope and magnitude of the problems the girls faced at the upper-middle-class school of 1,600 students.