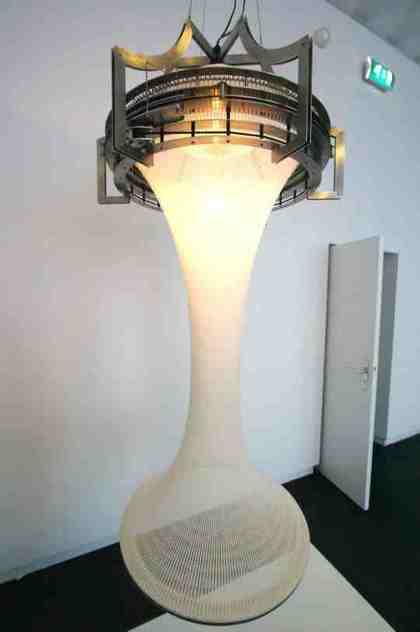 One of the things that most organisms do is grow without much outside assistance. New for Green Echo, is a lamp made by Nadine Sterk, on display at the Design Huis in Eindhoven, that does exactly that. The concept piece slowly knits its own lampshade, roughly three rotations per hour, once it is switched on. Even, if you removed the element of growth, the lamp would still remain interesting as a stand alone design. Aesthetically, the design is a pleasing clash between the mechanical and organic elements that comprise the lamp. The concept opens up an interesting dialogue on the nature of consumer goods of the future. Is there a possibility of products having a life cycle that emulates what organisms experience naturally? What if your sofa was enabled to adapt to new environments, or would deconstruct itself back into raw elements that could be reused once it’s usefulness had passed?  This may sound far fetched, but this type of design would not have to be overly complex. A container that could expand or contract as needed and then biodegrade itself would be a simple example. I would love to see some concept packaging and clothing that could grow, shrink, or in other ways adapt itself according to your current needs.