Finding It In Yourself To Forgive 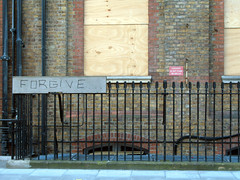 If you have been anywhere within earshot of a television or radio in the past several weeks, you are familiar with Governor Eliot Spitzer’s affairs with a high priced call girl, and the racially charged and unpatriotic comments made by and Barrack Obama’s minister and friend, Rev.Jeremiah Wright. Nightmares like this are enough to make even the most hardboiled public relations specialist wake up in a cold sweat. Strangely, the aftermath of these events couldn’t be more different. While, public outcry drove Spitzer to resign from his position, Obama escaped a potentially disastrous scandal unscathed and maybe even stronger than before. Why? Science may lend us an answer. Recent studies supported by The Templeton Foundation explore the idea of forgiveness and explain what drives us to forgive or to seek retribution. According to Case Western Reserve University psychologist, Julie Juola Exline, "Offenses are easier to forgive to the extent that they seem small and understandable and when we see ourselves as similar or close to the offender.” In a nutshell, we find it easier to forgive offences that we are able to envision ourselves committing. Another interesting fact this study underlines is that women have a much easier time forgiving than men do. That fact may fit more easily into Guys and Dolls than Inner Balance, but take this into consideration, does that mean that women can envision themselves committing wrong more often than men can? The difference is most likely the result of gender roles and not the product of devious minds. Excline thinks this is may be due to women being taught from an early age to be more empathetic than their male counterparts, in her words, women are taught to put themselves "in the shoes of others." This psychology plays out on many scales, Exline says, "When people could envision their own government committing acts similar to those of the terrorists, they were less vengeful….For example, they were less likely to believe that perpetrators should be killed on the spot or given the death penalty, and they were more supportive of negotiations and economic aid." If you or your business run into P.R. problems, using this Inner Balance concept to help you find ways to get the public to understand and empathize with the difficulties you face, will be the key to success. Was Barrack’s P.R. success due to the fact that his situation was easier for the average American to relate to and therefore forgive? I have to think, yes.